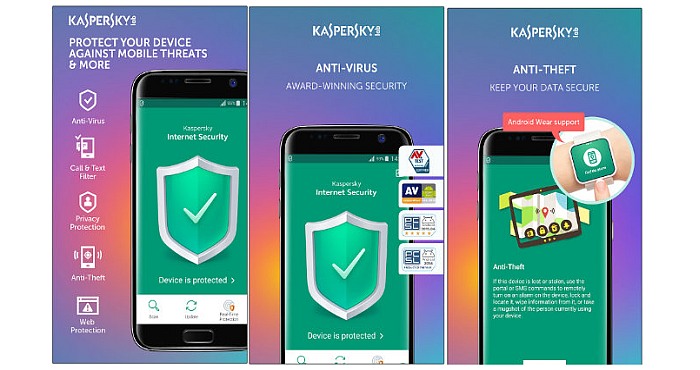 Kaspersky Antivirus is the enemy of Android malware and viruses. The antivirus helps detect and remove malware in both Symbian and Android phones. Today people are increasingly using smartphones to browse the internet. The fact that these phones are exposed to threats that reduce their functionality.

This app help protects user’s device from hackers who infect users’ devices with malware. According to the test done Kaspersky antivirus ranks at the top. It is because the antivirus offers high-quality protection. The app has well-defined features like high usability and anti-theft strategies. The antivirus have won more than ten silver awards hence making it suitable for use in Android devices.

The AV test named Kaspersky antivirus as the most efficient app. It is because out of two thousand malicious apps used in the test, Kaspersky was able to clean and stop all of them quickly. The Antivirus offers real-time protection to the phone. The app concentrate in protecting the device from scams, malware, and authentication. To block spams, the app has a feature that aids users to make lists of callers and text senders who a person wishes to block. It also enables people to keep their devices from unauthorized users.

The app has received high ratings from various tests done by more than six testing labs. The software offers the user with simple setting guidelines that are easy to follow. It also has good antiphishing scores hence making it more familiar to the users. It is quick and easy to install this app. The app can stop and remove harmful programs in devices without difficulties.

Some people argue that the app has less impressive scores. It also has difficulties in claiming it superiority when blocking malicious URL and malware.

The Kaspersky software is designed by able technicians who used the best development practices to equip it with desirable traits. Due to this fact, the app is easy set and manipulate. The app offers valid warnings and notifications to the users. The test results show that Kaspersky security gives accurate signs. Kaspersky Antivirus does not consume much battery charge hence it does not reduce the device battery life.

When users are faced with difficulties, the app offers them with a platform to enquire their concerns. The support is available all the time. The channel used include live chat, email, and telephone. Many Kaspersky users have been helped through this channels.